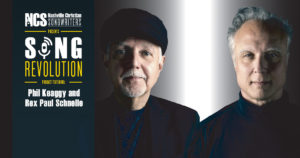 Phil Keaggy is known as one of the world’s greatest guitarists. He’s recorded over 50 albums since beginning his career in the late 1960’s and he’s not slowing the pace, even at 68-years old. Recently releasing a collaboration with Nashville producer and guitarist Rex Paul Schnelle called “Illumination,” the duo