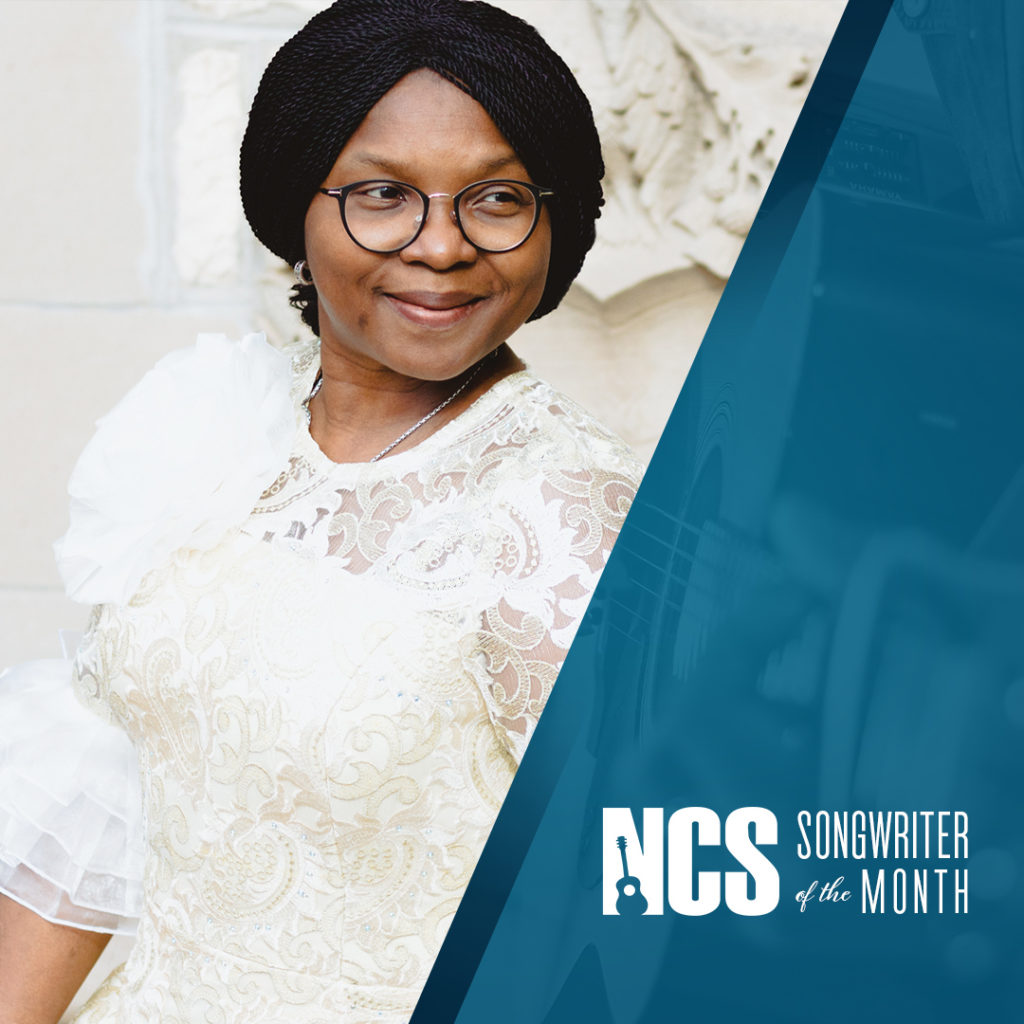 Olubunmi Akinpelu (Bunmilola) is dedicated, humble, and a lifelong student. Bunmi was born in Nigeria, and joined the choir at a church near her home when she was still a girl. From a young age, Bunmi found music to be a source of communication with her heavenly Father. Lyrics of songs, both songs that had already been written by various artists, and new songs that flowed from the depths of her heart, expressed her feelings when simple words weren’t enough (shown here with producer Chris Springer on left and NCS President John Chisum).

Through the circumstances of life, her prayers turned to songs and became structure and strength in the midst of life’s storms. For the first portion of her life, Bunmi assumed that writing songs was a natural part of everyone’s journey, and didn’t realize that she had been given a gift.

After her mother died during her second year of medical school, songwriting truly became an outlet to bring light to heaviness and sorrow. But it wasn’t until she was asked to write songs for her college choir that Bunmi even realized she could write songs. If you had asked her if she was a songwriter, she would have answered, “No.”

Bunmi, however, is not one to back down from a challenge. She shares, “If you ask me to do something, I won’t say that I can’t. I’ll just figure out how.” She went on to complete multiple songs that were performed by her college choir. And it was this willingness to rise to a challenge that helped her realize her gifting as a songwriter.

In 2016, after Bunmi completed her first album, she sought the help of NCS. A trusted worship leader friend listened through the album and felt strongly that Bunmi would benefit from some tools to hone her craft.

A simple Google search for “songwriting” led Bunmi to John Chisum, Nashville Christian Songwriters, and a community of like-minded people to help her grow into a skilled songwriter.

Sharing songs for critique can be so intimidating, and after submitting her first song, Bunmi struggled to feel that she was even adequate enough to be part of the group. She felt that others were lightyears ahead of her in skill. However, her heart to worship, and desire to do so with the best of her abilities, gave her the perseverance and resilience needed to stick with it.

Nashville Christian Songwriters has helped Bunmi grow in her confidence as a songwriter, and to date she has written and released three albums. The most recent album Crown Him King, under her artist name Bunmilola, dropped in December of 2019. You can find the album on all music platforms.

Beyond the desire to craft a beautiful song, Bunmi is passionate to lead people into worship, and come to a level where she can bless people with her words regardless of who they are or where they are in life.

Nashville Christian Songwriters has shown Bunmi that,”for everything in life there is a place to start, but the place to start is not where you should get stuck. Life is a journey, and it should be a journey of growth. And while you are growing, you will probably need one or two people to give you a kick, and one or two people to help you see things more clearly. No matter how annointed or connected you are, you need to go to school. NCS was like going to school.”

Bunmi, you are such a beautiful example of hard work, perseverance, and humility. You have been faithful to partner your natural gifts, and decades of writing songs with the tools, resources, and community found in NCS. We can’t wait to hear the songs that are still waiting to be written from your heart.

If you would like to receive the kind of songwriter coaching that Bunmi received, set up a free information call with NCS today. Just use this link to speak with us in a brief, no-obligation discovery call. Many songwriters have found new confidence, their true songwriting voice, and unimagined possibilities for their music through NCS Coaching. Is it your turn? Use this link to set up your call now.