Ginny Owens became a household name as the Gospel Music Association’s 2000 New Artist of the Year. Growing in notoriety as both a singer and a songwriter, winning 3 Dove awards and multiple ASCAP Awards along the way, Owens has sold over a million records over the course of her career. A top performer on the Christian radio charts with hits like “If You Want Me To,” “Free” and “I Wanna Be Moved” among others, Owens has released no less than 11 full albums and 3 EPs, and her music has also impacted mainstream audiences at Lilith Fair, the Sundance Film Festival and the White House.

In this episode, John Chisum has a chance to dig into the real life inspirations and struggles of this singer-songwriter who just happens to have been completely blind from three-years old. Despite this lifelong challenge, Ginny Owens has managed to capture a loyal audience with her soulful, yet-pop-oriented vocal style and songwriting and shows no signs of slowing down.

In this warm and often funny episode, John & Ginny cover everything from touring and songwriting to Ginny’s cooking with the Instapot® and Ginny shares valuable songwriting insights for every aspiring Christian songwriter.

Be sure to join NCS MEMBERSHIP today at www.nashvillechristiansongwriters.com  for the finest songwriter resources, coaching, inspiration and information! 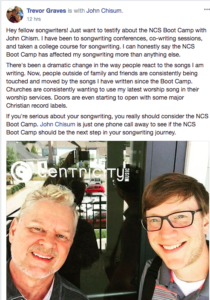 John Chisum is a pioneer in the Christian music business, serving alongside people such as Bill & Gloria Gaither, Twila Paris, Paul Baloche, Don Moen, and many more. As President of Nashville Christian Songwriters, John seeks to empower Christian songwriters worldwide to discover and fulfill their call to write.

PETER HARTZELL: Getting Your Music Out There

Drakeford on Songwriting, Ministry Beyond the Church, and Living the Singer-Songwriter Life