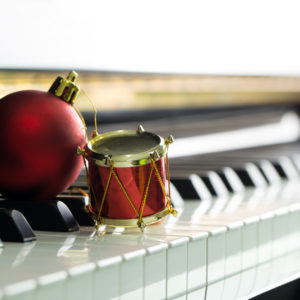 Ahhhh, the sounds of Christmas…. the ubiquitous Salvation Army Santa outside of Walmart and Best Buy with that annoying little bell clanging till you give him a buck just to make him stop (but he never does).

The bustle of shoppers and imaginary tinkling of Silver Bells, and the very real laughter and whooshing of ice skaters in Rockefeller Center. The carols and classic songs in the background on  It’s a Wonderful Life, Miracle on 34th Street, Holiday Inn, White Christmas, and all the movies we binge watch leading up to the big day to help us get in the Christmas spirit.

Seems like Halloween is barely over before the malls and shopping centers and music on hold cranks up the endless loop of Winter Wonderland, I Saw Mommy Kissing Santa Claus, and Frosty the Snowman, and, depending on your particular childhood memories of  how this holiday played out in your house, this is either really awesome or a slow merciless death akin to Chinese water torture that FINALLY stops dripping on Christmas Day.

But does the world really need another Christmas song?

Certainly no one needs another bad song about Christmas, but what if, just maybe…. you wound up penning a Silent Night or an O Come, All Ye Faithful, or a Tender Tennessee Christmas that actually became part of the sacred canon of Christmas tunes the world over?

Why the World Needs One More Christmas Song

Let’s start with WHY the world needs one more great song about the birth of Jesus. It’s not that complicated. One of my favorite Christmas movies is the 1970 Albert Finney version of the character Ebenezer Scrooge in Dickens’ classic “A Christmas Carol,” though the Muppet’s version is amazing, too.

We all know the story going in.

It’s no surprise that Scrooge is a wounded soul and has come to worship money as his only comfort and form of salvation. Somewhere along the way he becomes he becomes greedy and chooses money over Belle, the love of his life and woman he should have married

Does the world really need ANOTHER Christmas song?

Feared and hated by the townspeople for the miserly old man he’s become, visits from three ghosts turn his heart around overnight, a kind of resurrection and metaphor for being born again.

In the end, this is the only story.

If you ever take the time to study how hit movies are made, the themes of resurrection occur over and over again because it’s what we all long for and know that we need, even if we don’t know we need it.

It’s the story of the original fall of mankind and the rescue Jesus is for us replayed in a million ways, and, in this instance, the miserly old Scrooge finds “a born again experience” with the foreshadowing of his wasted life and destructive end. Not fun stuff, but I love it when Rizzo the Rat in the “Muppet’s Christmas Carol” ducks out for the final visitation from the quite scary Ghost of Christmas Yet to Come.

The word commercial only means “reaching the largest number of people…

On this week’s episode of The Song Revolution Podcast, I unpacked how hit movies are made using the Hero’s Journey narrative pattern identified by American scholar Joseph Campbell. Understanding how plots move along in movies and great storytelling can be a tremendous help in songwriting, too, so take time to check out that episode HERE.

SO, the 2,000-year old story of Jesus is actually the culmination of every pre-advent story – – – people have been telling a resurrection story for thousands of years BEFORE Christ that pointed to His coming in every culture and tongue. Now that we’re on the flip side of it, every story we tell points back to His resurrection story and THAT’S why it’s vital that we keep telling it in songs and in even more Christmas songs.

His story is OUR story.

That’s why we keep singing about it, writing about it, and telling it over and over again. Christmas songs center on His advent, His birth, which is only the BEGINNING PHASE, or the CALL TO ADVENTURE for Jesus, as described in the Hero’s Journey narrative. But now we’ve been called to adventure, too, to step out of the comfortable places and start our great adventure to total resurrection life by faith in His completed work.

His story is OUR story.

Why You MUST Write the Next Great Christmas Song

Every person who hears your Christmas song has the potential to respond to this call to adventure, too, and that’s why YOU must write it.

If you feel called to write for God, this is what you’re called to write – – you’re calling others out into the wild adventure of following Him, just as you have. If they follow that call through your song, they join the story of Jesus and He faithfully leads them along as He does you and me.

I don’t believe that most, if any, of the writers of the most-loved (and most-despised) songs of Christmas probably had any clue their creations would blanket the globe as they have, yet we wouldn’t recognize our lives or this season without them. I believe they were just doing what they could in the moment.

Father Joseph Mohr, for instance, had written a poem in 1816 called Stille Nacht, or, as we know it, Silent Night. But it wasn’t until two years later that he needed a song for Christmas Eve services in his tiny parish where the organ was in disrepair. Some say rust, some say mice, but either way, he gave the poem to organist Franz Gruber that day, asking him to compose a melody to it accompanied on guitar only. The two of them debuted the song that very night, and, who knows if it would have ever been written if it weren’t for a moment of need.

God’s given us gifts for the people around us first and for the rest of the world after that, if at all.

Silent Night is now sung in over 300 languages worldwide, but Mohr and Gruber were only concerned with writing for their small parish that Christmas Eve long ago. Sometimes I wonder if we’ve forgotten that God’s given us gifts for the people around us first and for the rest of the world after that, if at all.

In the NCS boot camp called Mastering the Art & Craft of Christian Songwriting, I teach the  aspiring writers to write with the end user in mind and that the word “commercial” only means “reaching the largest number of people…” But it all starts right where you are with whatever you have to work with, rusty mice-eaten pipe organs and all. If we set our sights on the world and neglect the people at home, we may miss the only real calling we have.

Yes, the world actually DOES need one more great Christmas song to keep telling the world’s greatest story of the love of God come to earth in a Baby. And the world closest to you needs your song the most, because, for some, it may be the only song they hear this Christmas.

I tend to cringe when the Christmas season begins, dreading the endless stream of the same songs over and over, yet I believe there’s always room for one more GREAT Christmas song  – I really do – and I think YOU should write it. Maybe now you can walk through the mall and start humming along with the songs again, actually enjoying yet another version of “Winter Wonderland.”