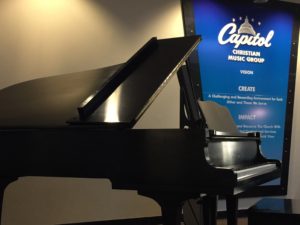 If you find yourself asking any of these questions, read on.

While we’re all gifted and skilled in unique ways and at differing levels, it IS possible to grow in your knowledge, understanding, and execution of writing great melodies for your own lyrics or when working with others. Here are three key things you can start with today to learn how to get started writing great melodies.

#1) Start with the basics. Melodies are simply patterns of notes put together to form a singable “line.” We only have 12 notes in the musical scale, so that’s what we work with. In The Craft of Christian Songwriting, writer/arranger Robert Sterling points out, “Twelve notes. Twelve simple notes. That’s all we have in our musical toolbox. Every melody ever written in Western civilization, from Bach to the Beastie Boys, has been composed with those same twelve notes.” So the place to start your journey in writing great melodies is to learn the twelve notes in the scale by humming them or getting someone to show you on a keyboard how to play them.

Apple also has a nifty app called Chords and Scales you can play with to begin learning basics https://itunes.apple.com/us/app/chords-scales-interactive/id714086944?mt=8, and the Piano Chords and Scales Companion from Googleplay looks pretty intuitive and helpful for learning the basics of writing great melodies https://play.google.com/store/apps/details?id=com.binitex.pianochords&hl=en.

[bctt tweet=”Is it possible to become a successful Christian songwriter without playing piano or guitar?” via=”no”]

#2) Let the lyric suggest a melody. Lyrics have their own way of suggesting melodic rhythms and even melodies themselves. Listening to the first line of the chorus of the classic You Raise Me Up (Lovland) popularized by singer Josh Groban, it would be nearly impossible to imagine the lyric “You raise me up” descending rather than ascending. Scanning a lyric line such as Above all power, above all thrones from the classic worship song Above All (Baloche/LeBlanc) naturally suggests the quick pickup of a-bove simply because that’s how we say it. We don’t usually say “UHHHH-bove,” with an extended emphasis on the first syllable of that word unless we’re trying to be funny. Single words and entire lines suggest their own rhythms and melodies, if we’ll learn to listen to them.

[bctt tweet=”Single words and entire lines suggest their own rhythms and melodies, if we’ll listen to them.” via=”no”]

#3) Find a model for your melody. Wise old Solomon pointed out exhaustingly in the Book of Ecclesiastes that “there’s nothing new under the sun.” It’s true in writing great melodies, too–there’s simply nothing new unless you learn how to uniquely combine existing elements into something fresh, which is what writing great melodies is all about. Stuart Townend said (somewhere) that he wrote How Deep the Father’s Love for Us by combining elements of all his favorite hymns. That’s why this wonderful song sounds like a classic hymn. He borrowed elements from many classic hymns and combined them in a fresh new way to deliver yet another classic hymn for us to love.

I once heard Bill Gaither say he wrote the melody to Because He Lives by inverting the melody from the classic country song I Can’t Stop Loving You. Brilliant. If you listen to those songs you’d never connect them, but obviously Mr. Gaither thought of the idea of inverting the melody and modeled the melody of his new song from it. You can do that, too. Pick the style, tempo, and feel for the song you’re writing, find one in that genre, and then invert, combine, shift, change, and model your new song from it.

[bctt tweet=”There’s nothing new to write unless we uniquely combine existing elements into something fresh.” via=”no”]

Obviously, songwriters who aren’t musicians will have to put more effort into their melodies until they get the hang of it. But, it’s worth getting these basics down and experimenting with them. You might be surprised with what you come up with!