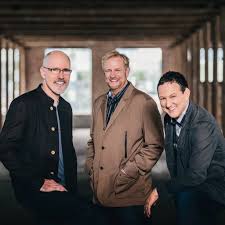 Few songwriters cultivate more fertile creative soil when crafting a new album than Phillips, Craig, and Dean. Juggling dual vocations as both pastors and recording artists for more than two decades, Randy Phillips, Shawn Craig, and Dan Dean have created an impressive body of work inspired by what God is doing in their lives and their respective churches.

Transparency, passion and integrity have long been the foundation for Phillips, Craig, and Dean’s music and ministry.  For more than two decades, the trio has churned out some of Christian music’s most enduring hits, including “Revelation Song,” which recently earned RIAA Gold Single status, signifying downloads of more than 500,000.  This is only the seventh time in the history of Christian music that a single has reached gold status. The song spent 17 weeks at No. 1 on Billboard’s Christian AC chart and also topped the National Christian Audience chart, AC Indicator chart and Soft AC charts.

On this week’s episode of The Song Revolution Podcast, I got to sit down with PCD’s Dan Dean to recall the group’s beginnings in 1991 at Star Song Records and to walk through highlights of the group’s fantastic 25-year run. Dan shares some great stories, his songwriting process, and some valuable songwriting advice to aspiring writers.

John Chisum is a pioneer in the Christian music business, serving alongside people such as Bill & Gloria Gaither, Twila Paris, Paul Baloche, Don Moen, and many more. As President of Nashville Christian Songwriters, John seeks to empower Christian songwriters worldwide to discover and fulfill their call to write.

Should Songwriting Be a Solo Sport?